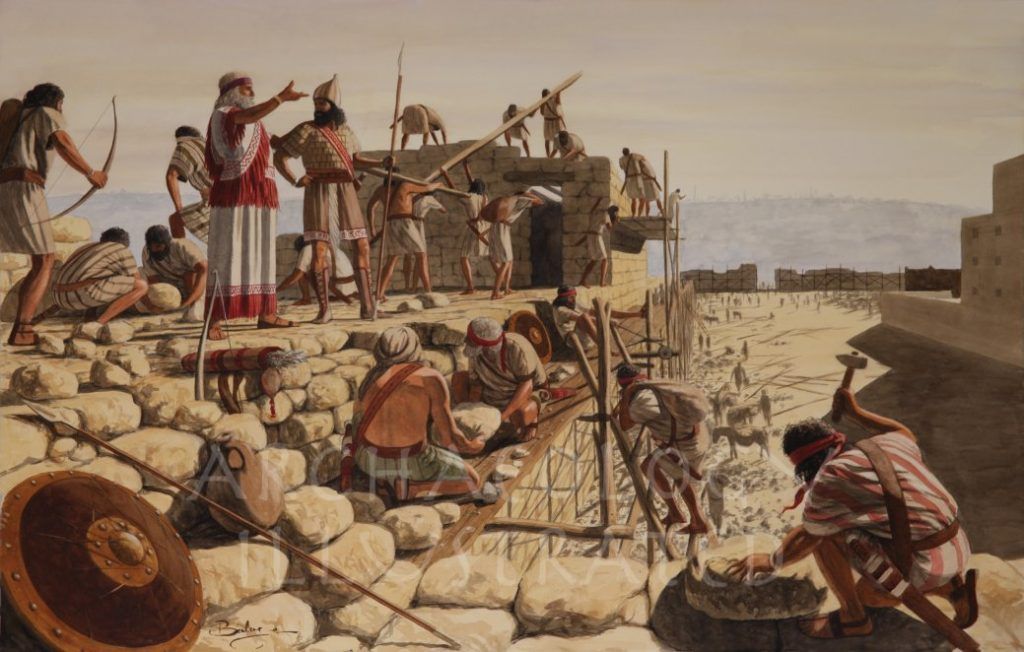 One of my hero’s is a guy named Nehemiah.  Nehemiah’s grandparents were from Jerusalem and they had been taken into captivity by the Babylonians.  By the time Nehemiah came along 100 years later, the Babylonians had been defeated, and he was in service to the new masters of the universe, the Persians.  No matter where you are, no matter what your circumstances, you need to make a choice:  “you either get busy living or get busy dying.”  Nehemiah chose to get busy living in Susa, about 450 BC.  If you look on a map you can see he was a long, long way from home.  In all the time they were in exile Nehemiah and his family never lost their faith.  They trusted in God.  Nehemiah became cup bearer to the King of Persia.  The cup bearer’s job was to taste all of the wine that came before the king; not to see how good it tasted, but to make sure it was not poisoned.  You never had to ask a cup bearer “how did your day go” when they got home from work.  Coming home alive meant you’d had a good day.

Being the cup bearer to the king was actually a pretty good job, because it gave you access to the king.  The cup bearer was someone the king trusted to keep him safe.  One day a delegation came from Judah, which was a province very near to Jerusalem.  Because Nehemiah was a part of the kings court, he had a chance to ask them about the state of affairs in Jerusalem.  They said him, God’s Holy City, the city of Jerusalem is in ruins; the people who have returned from exile are living in disgrace.

On hearing this, Nehemiah broke down and wept.  He wept because God’s plan of love and redemption; of creating a healthy community that recognizes that God is the creator of all world, seemed to be in jeopardy.  But, that doesn’t stop Nehemiah.  He is someone who trusts God and chooses to get busy living.  So, he prays for God’s forgiveness, he asks God to give him success in rebuilding God’s kingdom, and then he goes to see the king.

Nehemiah’s success begins with his shock at a terrible state of affairs of the Holy City, Jerusalem.   He responds to his shock by saying, “I can’t stand things they way they are, I‘m going to work and plan to make a difference.  And that’s why he is one of my heroes.  He sees a problem.  He is passionate about changing things.  He is a person of prayer.  He trusts God.  He plans for success and then he acts.

We have some Nehemiah’s among us in St Michaels and St Georges.  Are you one of them?  They are working together to look for ways to rebuild the Kingdom of God here in the Bow Valley.  You know in our culture fewer people say they are practicing Christians, and the number who say they have no religious belief has risen to 34.6%.  Like those who were living in Nehemiah’s day 2,500 years ago, it seems as though we are in the process of forgetting God.  The walls of the kingdom today, like the walls of Jerusalem in Nehemiah’s day are in disrepair and something needs to be done.

Jesus called the people of St George’s Banff and St Michael’s Canmore to be a people on a mission to bring others into the kingdom of God; to be builders of God’s community.  Our vision is, “to Live out God’s purposes for us, to make Christ known in the Bow Valley, and to raise up the next generation to love and serve the Lord.”

We can only do that if we are united:  united in the same vision, united as Churches, united in faith, united in our desire to see new life in the Bow Valley.  We have people who are good at praying, paying, serving, teaching, loving, caring, organising, leading, building – the list goes on and on. We need to be united in using our talents and gifts to serve God and one another.  We need to be a people who live out the words of the Lord’s Prayer.

God is calling you and each one of us to be united in helping, nurturing, caring and supporting each of the churches in our Parish in order to rebuild the kingdom of God here and now.  Today, we need more and more who have the vision and courage of Nehemiah.  They are looking to see where there is a need, they are praying and asking God to help them use the talents he has given them to build the kingdom.  Our Church will only be as strong and as vibrant as the people who get involved and who are obedient to God the Father; who have the love and mercy of Jesus, and who allow the Holy Spirit to empower them to do the work of God.  You will learn more about all this during our stewardship campaign near the end of January 2023.