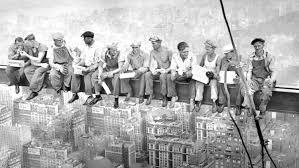 DA GUYS  is a men’s group who meet for breakfast on the first Saturday of each month October through June. The idea began eight years ago when Rev. Betty Piwowar (our priest, now retired) asked our deacon Rev. Sean Krausert to find a way of getting more men involved in the life of St Michael’s. Sean immediately thought of bacon and speakers and we began holding a monthly men’s breakfast.  We started with an attendance of a dozen or so men of St. Michael’s and some of their friends and now have a mailing list of 150, only about one quarter of them from St Michael’s, and a normal attendance of 30 to 40. There is time for fellowship, a full British breakfast (a tradition started by Alan Pryor and Doug Bushulak) and an interesting speaker. Recent speakers have been Gerry Stephenson (mining engineer and raconteur) Daryl Kootenay (Stoney Nakoda youth leader and Banff Centre faculty member) and Brian McClure (President & CEO of Innovate Canmore, the Bow Valley's new Centre for Technology, Innovation and Entrepreneurship). While it is intended to be a men’s group, women are hospitably received when they show up, and once a year we invite Da Gals to join us. You can get involved by coming to a breakfast (please let Ron Lewis know you are coming), or by joining Da Crew (eight or ten Guys who set up or cook or wash dishes for an hour before or after the breakfast). All of Da Guys are encouraged to invite their friends – one, Roger Truman, has done that so well that many of the cooks are now his cycling buddies, the Grumpy Bears. We charge $7 and normally make a small profit which has gone either to Food & Friends or to the St. Michael’s capital fund. The next breakfast is Saturday June 1 when we will hear Brian Dunn, the founder and president of the Canmore Brewing Company. After that we will take the summer off and start again on the first Saturday of October. Contact Ron Lewis: ronlewis430@gmail.com or 403-688-3046