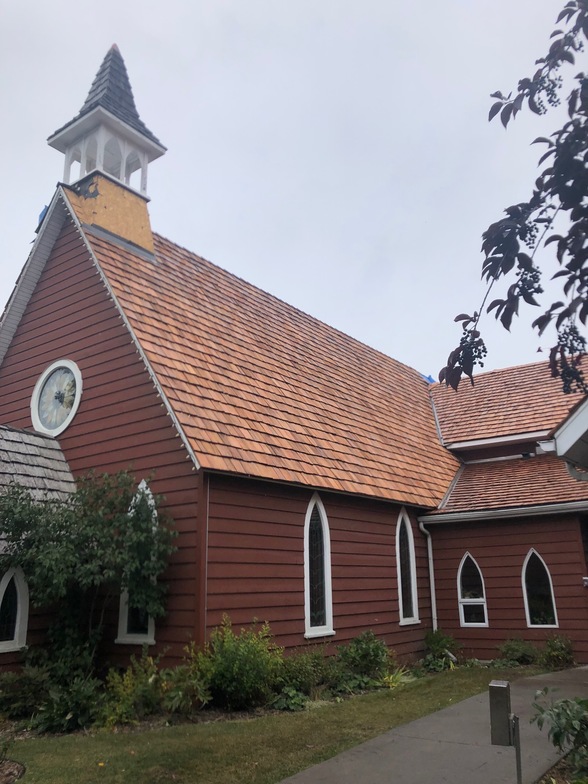 St. Michael’s parish has just celebrated its 125th  anniversary, starting up in 1893. The church building was constructed in 1896.  A new hall and offices were built in 1992 to provide space for community events, and the church enlarged in 1997. We have just finished replacing the roof on the church and hall, after an inspection showed that some of the cedar shakes had deteriorated enough to need immediate replacement. Despite that deterioration, the roof structure was found to be in perfect shape, even though the oldest part is now 123 years old. The old roof still had its original cedar shakes (painted and repainted they had lasted nearly 80 years) under the “new” ones put on in 1975.St. Michael’s serves the community by providing space for community events, most notably the Food and Friends dinners (operated at St. Michael’s by a group of churches, other organizations, and businesses) for more than 300 people each week.  The church hall also hosts numerous concerts, art classes, meetings, monthly men’s breakfasts, social events, weddings, funerals, and part of the Bow Valley Music FestivalTo accomplish this we have been doing major renovations over the last few years including new equipment for the kitchen, new washrooms including a wheelchair accessible one, and replacing the roof. Next is replacing the floor in the hall and offices.The money to pay for all this, and to build up a fund for future renovations, has mostly come from St. Michael’s parishioners, with some grants from the town and province, and support from service clubs and local businesses. The recent fundraising campaign has raised about $160,000, including $65,000 from an anonymous donor who undertook to match the first $65,000 donated by others.

Sep 12
Lose Your Life To Save It