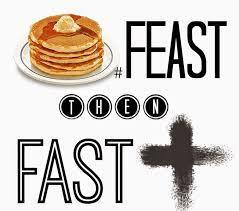 Shrove Tuesday (also known as Pancake Day) is the day in February or March immediately preceding Ash Wednesday (the first day of Lent), which is celebrated in some countries by consuming pancakes. In others, especially those where it is called Mardi Gras or some translation thereof, this is a carnival day, and also the last day of "fat eating" or "gorging" before the fasting period of Lent.

This moveable feast is determined by Easter. The expression "Shrove Tuesday" comes from the word shrive, meaning "absolve". Shrove Tuesday is observed by many Christians, including Anglicans, Lutherans, Methodists and Roman Catholics, who "make a special point of self-examination, of considering what wrongs they need to repent, and what amendments of life or areas of spiritual growth they especially need to ask God's help in dealing with."

As this is the last day of the liturgical season historically known as Shrovetide, before the penitential season of Lent, related popular practices, such as indulging in food that one gives up for the upcoming forty days, are associated with Shrove Tuesday celebrations. The term Mardi Gras is French for "Fat Tuesday", referring to the practice of the last night of eating richer, fatty foods before the ritual fasting of the Lenten season, which begins on Ash Wednesday.

Sep 12
Lose Your Life To Save It